Aka Terror in the Midnight Sun aka Invasion of the Animal People. 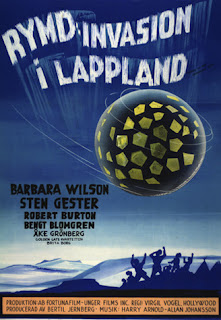 Aliens go to Sweden...
Terror in the Midnight Sun is an American/Swedish co-production. After a meteorite crashes in the wilds of Lapland scientists are sent to investigate. There is something peculiar about this, since meteorites generally don’t leave skid marks. Dr. Frederick Wilson (Robert Burton) provides the Swedish scientists with international expertise. His niece Diane Wilson (Barbara Wilson) also happens to be in the area. They are both great excuses for making the locals in large part speak in English, though with that heavy Scandinavian accent.
The movie spends the first half hour setting up the mystery that surrounds this meteorite crash. Based on the title alone you know aliens will be involved and waiting for the characters to become as knowledgeable as the audience becomes slightly boring. After the aliens’ presences have been established the movie picks up pace. We are treated to an alluring shot of Diane behind the shower curtain early on though. There is also a great silhouette shot of her later on. It’s a nice reminder in today’s world of excess that less can indeed be more. This applies for the big alien creature as well. Director Virgil Vogel wisely keeps it off screen for a long time instead of optioning for fast gratification. Miniature models and conscious editing does the magic in creating the illusion of a giant alien, not just a regular guy in a fancy suit. 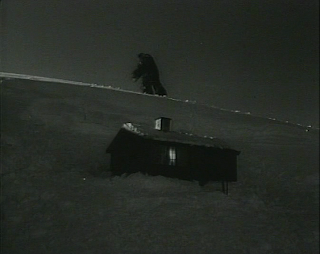 Playing with perspectives. The big alien creature planning to raise hell.
The landscapes of Lapland help creating a moody atmosphere. Man seems insignificant in these vast landscapes and even more so when juxtaposed against the creature. There is an otherworldly feel to this snow and ice covered place. 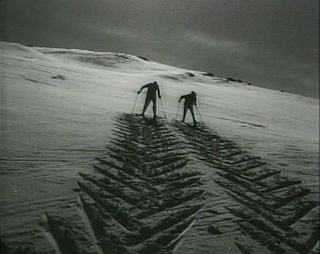 Inspired cinematography; Look at the twisted human shapes along with the crooked camera angle and a ski tracks swinging slightly from the left.
I was pleasantly surprised to discover Vogel previously had served as an editor on Touch of Evil (1958) and cult sci-fi This Island Earth (1955). His career directing has mostly been in television with westerns such as Bonanza and High Chaparral and crimes like Mission: Impossible, Streets of San Francisco, Airwolf and Magnum P.I. to name a few. I doubt Vogel will ever have a huge fan base, but I for one intend to seek out more from him.
Terror in the Midnight Sun is a run-of-the-mill alien monster movie. There are no big surprises, but what’s on display looks pretty good. What sets it apart from others is the atmospheric setting and use of Sami and Swedish actors giving a cultural flavor to it. Besides how many alien monster movies set in Sweden from the 50s are you likely to find? Terror in the Midnight Sun is a rare movie that deserves more attention from sci-fi and horror fans.
6/10
Lagt inn av Cinemabarrel kl. 08:56

Cinemabarrel
Movies you haven't seen, but you sure want to!